Now that Helfa Gelf is over …..

Posted on September 29, 2013 by judithsamuel

I seem to have been working hard for months to create a body of work for Helfa Gelf – the North Wales Open Studios Event.  It’s been a really busy Spring and Summer: from May onwards I was rushing off every other day to the dunes to watch the progress of the Little Terns, then racing to the studio to get some of it down on canvas and paper so that I’d have something to show people.  I wanted to produce something interesting, as many paintings of wildlife subjects are accurate but deadly dull in my opinion.  Little Terns are tiny, fast, agile balls of ferocious aggression (especially when they think their fledglings are threatened) and I wanted to convey some of this by experimenting with the placing of the bird in the frame: 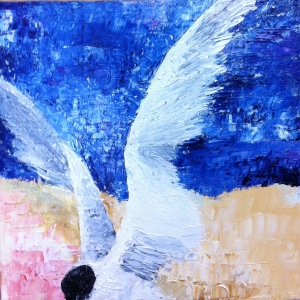 I like this, and the advantage of the Open Studios is that you get honest feedback – one friendly guy who said he ‘wasn’t arty but was just coming round with his wife, who was’ really liked it too, which I found encouraging.  I have to say my husband, my closest critic, doesn’t like it at all.

I’ve also been experimenting with incorporating maps and navigation charts in the paintings.  I’d already been going that way with my later sailing ship pictures, the one below combines a map of the colony with one of the inmates, and can presently be seen at the Willow Gallery, Oswestry:

Again, others were more cartoon/illustration based, and might be used in the book I’ve got in mind:

The next project is to complete the translation into French of ‘The City of Ottawa: the Story of a Sailing Ship’ for publication of the Quebec edition, so I’m going to leave these ideas to simmer for a while and see what comes out of the mix.